Menk Vladimir Karlovich – was born on February 1, 1856 in a merchant family in Arkhangelsk, Russia. In 1876-1878 he studied at the drawing school under the Association for the Support of Artists in St. Petersburg, which he graduated with a silver medal. In 1878-1881 he was a volunteer at the St. Petersburg Academy of Arts. Took lessons from I. Shishkin and I. Kramskoy. In 1879 Menk was awarded a large silver medal. In 1880 he received the second prize of the Association for the Support of Artists for the painting "Morning in the Swamp" (later this work was acquired by P. Tretyakov). Since 1880 he was exhibited at various exhibitions within the country, as well as international exhibitions in Berlin (1902), London (1911), Venice (1914). From 1886 he lived in Kyiv. Traveled across the Crimea and the Caucasus. Traveled to Austria, Germany, Italy. Participated in the painting of the Vladimir Cathedral in Kyiv. From 1892 he taught at the Fundukleevska Kyiv gymnasium, in 1896-1920 - at the M. Murashko`s Kyiv drawing school. Among the students O. Exter, O. Bogomazov, G. Besedin, F. Konovalyuk and others. Menk was one of the initiators of the creation of the Kyiv Art School. The artist died on December 27, 1920 in Kyiv. 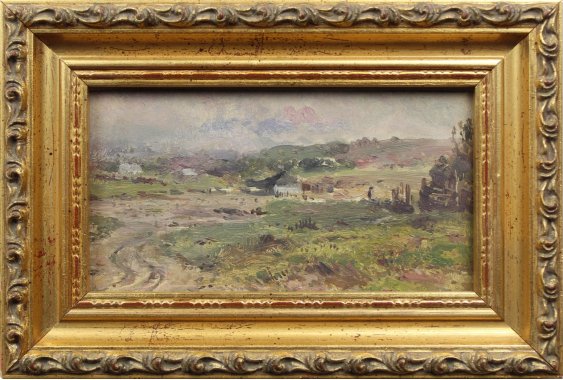 "Lonely trees"
9x14 cm
Price on request
Get the price