Bokshay Joseph Josephovich – was born on 2nd of October, 1891 in the Kobyletska Polyana village, Transcarpathian region. He studied at the Budapest Art Academy. During the First World War he was captured by the Russian army. In the spring of 1918 he returned from captivity in Transcarpathia and began his pedagogical activity in the Uzhgorod Real Gymnasium, where he worked until 1945. Joseph Josephovich worked in the landscape genre, painted at the beginning of his carrier with pastel and then oil paints, uses subjects from the people`s life, is interested in church subjects. The first personal exhibition took place in 1926 in Prague, and then in the same year in Uzhgorod. In 1940, together with Adalbert Erdeli organized a new association "Union of Carpathian Artists", and in 1946 the artist became one of the first mentors of the Uzhhorod Art School in the Faculty of Painting and a member of the regional organization of the Union of Artists. From 1951 to 1957 he worked as the head of the examination commission at the Institute of Applied and Decorative Arts in Lviv. The artist`s paintings were exhibited at many famous exhibitions that took place in Ukraine and the Soviet Union. Since 1951, Honored Artist of the USSR, Corresponding Member of the Academy of Arts of the USSR since 1958, National Artist of Ukraine since 1960, National Artist of the USSR since 1963. The artist died on 19th of October, 1975. Transcarpathian Art Museum in Uzhgorod was named after Joseph Bokshay. 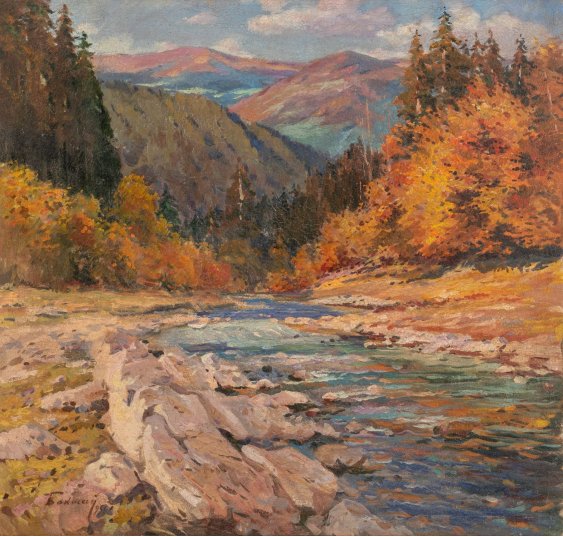 "Mountain river"
86x90 cm
Price on request
Get the price