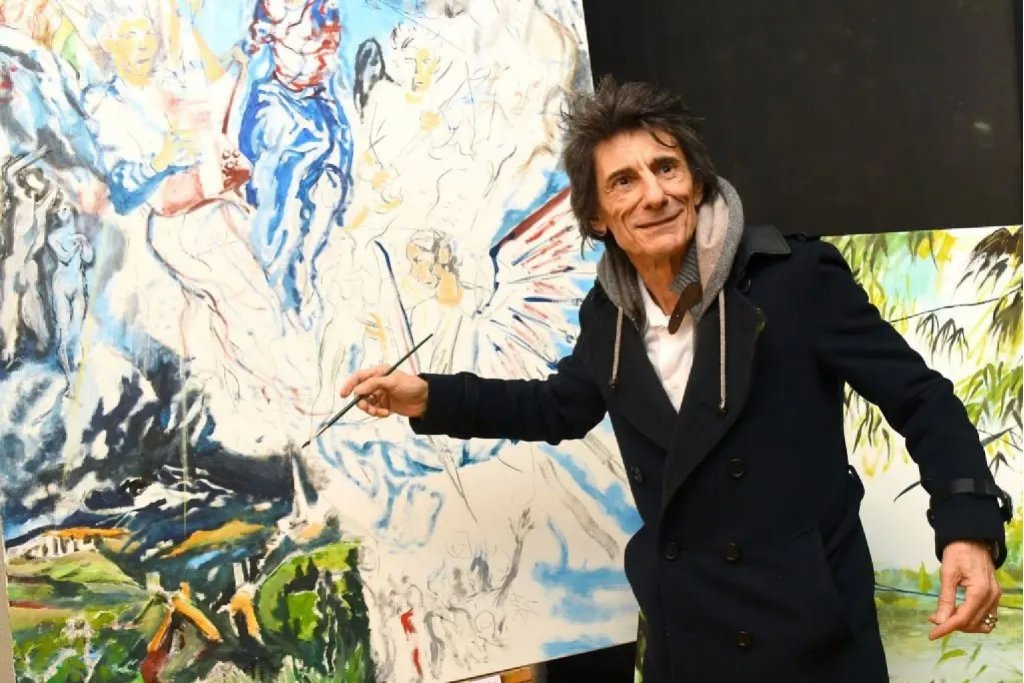 Ronnie Wood of The Rolling Stones may be considered one of the greatest rock guitarists. But will critics praise his artistic ability in the same way? The British Newspaper The Guardian published the opinions of art experts on Wood's paintings shown at the exhibition, which started on August 21 at the historic English estate of Ashridge House in Hertfordshire.

Over 100 of Wood's works will be on display, including paintings, sculptures and prints. Many of them have not been shown before. Some were created during quarantine, others can be called Wood's “greatest hits”. Among them - a large painted tapestry based on the famous photo shoot for the Beggar's Banquet album, which the Rollings released in December 1968.

The proceeds from the exhibition will be transferred to the UK National Health Service.

On the occasion of the screening, The Guardian asked art critics for their opinion on the rock star's artwork, and they did not hesitate in expressions. Particularly went to the works of Wood based on "Guernica" and "Three Dancers" by Picasso.

“It looks like he took one of the greatest and most exciting works of art, a desperate anti-war cry, and used it as the basis for his own terrible fan art,” critic Oliver Basquiano told the newspaper. “In art, you often need a decent dose of insolence, but that's too much.”

“Ronnie is infinitely better at the guitar than with the brush,” added Louise Buck of Art Newspaper. “Only the ego of a rock star can admit that when he and his band are dancing boogie-woogie amid the destruction of Guernica, it's okay. And Mick [Jagger] as Picasso's dancer? Please no. If he wanted to raise funds for the National Health Service, why didn't he just come played his music?"

Ronnie Wood, now 73, began painting in the early 1960s while attending Ealing Art College. Throughout his career, he regularly worked, in particular on the design of the band's albums. Mick Jagger, Keith Richards and other "rollings" often appear in his works.

Adrian Searle of the Guardian stated that "Ronnie Wood's paintings are livelier than Prince Charles's watercolors, and he paints better than Queen Margrethe of Denmark." However, about Guernica, the critic was in solidarity with his colleagues, saying that this "shoddy stylization is terrible": "The inhabitants of Guernica were bombed and killed from the air, and the Stones were bombed only with drugs."

The mildest review came from another Guardian reviewer, Jonathan Jones. “You can't separate the art of a rock star from his music,” he said. "The Rolling Stones are the sexiest and most demonic rock band in history, and Ronnie Wood seems to be fascinated and overwhelmed by their diabolical antics like any other."

He added that Wood's varied paintings show “a fresh perspective and many achievements”: “There is a pastoral calmness in the style of David Hockney in his landscapes. He could have become a landscape painter if he hadn't been haunted by those dark satanic riffs.

Wood himself admitted that he has long been inspired by the beauty of Ashridge House and its incredible gardens. “I have passed it many times and have always been intrigued by the way it looks inside and the history of this place. Over the years, I have recreated Ashridge in many of my paintings, so finally going inside and exploring such a historic and fascinating place and getting the opportunity to show my work is a really special moment,” said the musician.